Since I posted this I chanced to find an old packet of slides. So I inserted a few of them instead of what I got from Google. There are more coming in the next post.

They were young. But as only young boys know that they will have true and everlasting love, the young also know that are touched with rare maturity.
There is a distance betwen being lost and finding yourself; it may be measured in miles or in minutes, in yards or in years. Sometimes you find yourself long, long before you know you are lost.
They took a Citroen Parisienne and drove to the centre of Australia. Oh what a great car to drive to the centre! A unique suspension! An hydraulic suspension and with a move of a lever the car rose off the ground and rode over rocks and fallen trees.
“When ya get to Kingoonya tell the local copper where you’re goin’. Lot of folks get lost and no one knows where they were headin’ so no one knows where to start lookin’.”
“We are going to Coober Pedy and then on to Alice Springs,” they said, when they got to Kingoonya. “Is there ever any trouble in Coober Pedy?”
“Well sometimes there might be a blue between a couple of drunken miners. We usually put it down to ‘accidental death’ because no one up there has ever seen anything. But you boys ‘ll be right if you don’t do something stupid.”
They went to Coober Pedy.

But on the way they had trouble. A desert rock flew up from one of the wheels and struck the small copper pipe that took pressureised hydraulic fluid to the back left wheel and half the fluid bled onto the desert and the car dropped until there was only two inches of clearance between desert and the bottom of the car. They were stuck.
No one passed for half the day and then it rained.
The road from Kingoonya to Coober Pedy is straight and flat and bitumen. It is now. Then it was gravel and a road grader traveled from Kingoonya to Coober Pedy and graded one side of the road flat and smooth. When it got to Coober Pedy a week later it turned around and graded the other side of the road flat and smooth all the way to Kingoonya. And after some years the road was twelve inches below the level of the surrounding desert.
And it rained. And the road became a river and with what little hydraulic fluid they had that remained they drove out of the road and onto the desert, and so the car was not drowned.
What they needed was to get under the car to fix the broken hydraulic pipe. But without hydraulics they could not raise the car off the ground. They would have to lower the ground under the car. They were young, but even to them it was obvious.
So they dug a trench under the car. 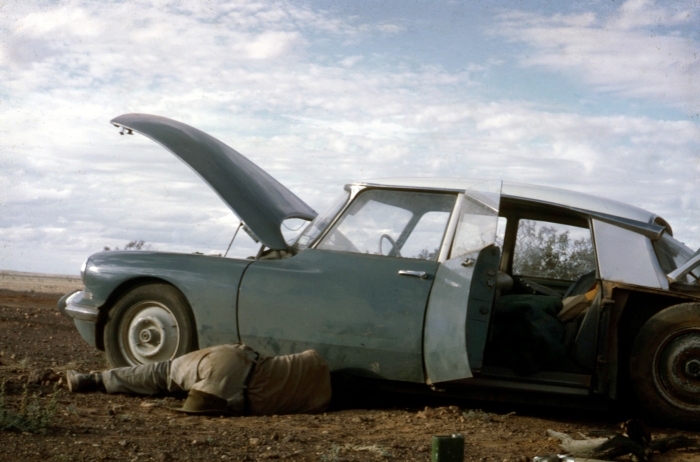 They started to dig a hole under the car

It took all that day and half the next day and at night they were stuck one hundred miles from anywhere at all in the middle of a desert as flat and lacking features as a billiard table. Under the car, in the trench it was not so blazingly hot as in the direct sun.
At night it was cold and there was no moon and it was black and they could see only a small way ahead of themselves. There was nothing to do so they made a game of the darkness. If you walk in darkness, or blindfolded, and keep to a straight line you will tend to curve to one side or the other depending on whether you are right handed or left handed.
So the game they played was simple.
“You will walk in a straight line for five minutes and then you will turn around and walk back for five minutes. After ten minutes you should , in theory, be back at the car. So after ten minutes I will sound the horn and you will walk back. Aften another five minutes I will flash the car lights. And your score is the elasped time.”
So they played their game, taking turns. The desert was so flat they could not get lost but they could have walked away a long way.
Under the car the next day they broke the small copper pipe completely, blocked the end with chewing gum and bent the pipe and hammered it with rocks. It sealed the pipe sufficiently to allow the pressure to build a little. The front of the car lifted off the desert floor. 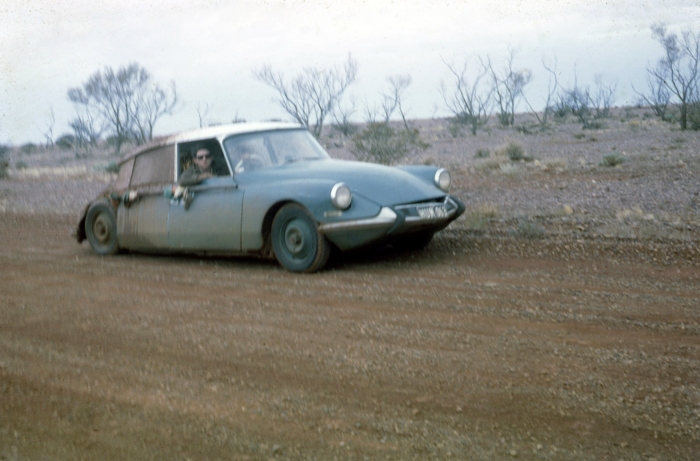 At least they got the front off the ground

The desert had nothing. No feature except its nothingness.

But even after all these years they both remember it as something special.
They found themselves that night although they were lost for many years afterwards. And many a time they knew that deep in the recesses of the soul they had found themselves in that same place.
“You can never go back!”
“Oh yes, you can.”

6 thoughts on “Lost with Photos”